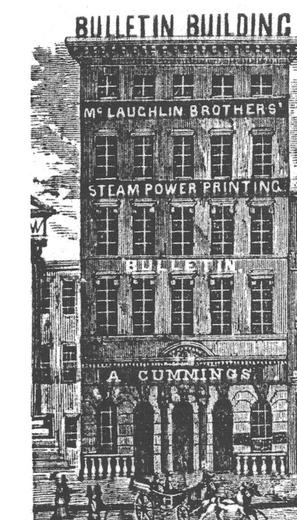 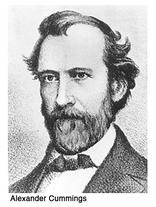 In April, 1847, Alexander Cummings founded Cummings' Telegraphic Evening Bulletin in Philadelphia to take advantage of new technology that brought news over telegraph wires, giving readers same day reports from the battlefields of the Mexican War. Under the five decade editorship of Gibson Peacock, The Bulletin grew in reputation, but remained modest in size. Upon Peacock's death in 1895, ownership passed to William L. McLean. Under his leadership, the newspaper's circulation increased from 6,000 to 150,000 in just 15 years, and it remained the city's largest newspaper for some 70 years, reaching a peak of near 800,000 in the 1960s. A third generation William McLean was at the helm in 1980 when the paper was sold to Charter Co., which closed it in January, 1982.

History of the Evening Bulletin

Alexander Cummings put out a sample issue on Saturday, April 10, 1847, to acquaint the city

with the new newspaper, but the first issue of Cummings Telegraphic Evening Bulletin with

Cummings was born in Williamsport, Pennsylvania, in 1810. His brother started the Lycoming Chronicle in 1829. Cummings took over the paper in 1833 at age 23, sold it to another paper in 1837 and came to Philadelphia. He had a dry goods business briefly, but then became publisher of Neal’s Saturday Gazette, founded 1841, owned by the widow of Joseph C. Neal.

In October of 1845, Cummings and George R. Graham bought the North American, founded 1839, from William Welsh. The partners disagreed over politics, and Cummings left. Cummings then purchased the plant and subscription list of The American Centinel and Mercantile Advertiser, which had been printed in Philadelphia since Aug. 25, 1816. He set up shop at 108 S. Third St., and started Cummings Telegraphic Evening Bulletin, featuring news received by telegraph, less than three years after Samuel F. B. Morse had demonstrated the new invention. Up to 1847 there had been no successful afternoon newspaper, and it was generally deemed impossible to make a paying investment out of such a venture.

The paper started as a six column folio, was later enlarged to seven columns, 24 by 36 inch sheets of paper fed by hand into a “Type-Revolving Press”. Richard Hoe had built the first one the year before. Hand set type was secured on a cylinder, rather than a flat bed, and could make 2,000 revolutions an hour. Cummings produced 1200 four-page papers an hour.

Within the first year, Cummings sold an interest to James Peacock, former publisher of the Harrisburg Republican, on which Simon Cameron, later United States Senator from Pennsylvania, had served an apprenticeship. Peacock’s son, Gibson Peacock, a graduate of Dickinson College, joined the editorial staff. James later resold his interest to Cummings, but Gibson Peacock stayed on, and soon the editorial department was under his supervision.

On Wednesday, November 20, 1850, The Bulletin created a sensation by appearing as a double sheet, something not before seen in Philadelphia. That size appeared frequently thereafter, and it became the permanent daily format June 21, 1860.

The Bulletin office on February 28, 1853, moved next-door to a five story

sharing it with the offices of Jay Cooke & Company, the city’s leading financial

floors. The hand-fed double cylinder press that had been used from the beginning

produced more than 1000 papers an hour.

The Bulletin prospered in the Fifties. Peterson left about 1854 to give full

which was known for its color fashion plates. Charles G. Lehman, writer of

humor as “Hans Breitman,” became assistant editor of The Bulletin in 1855.

Casper Souder, Jr., was promoted from reporter to city editor when Blackburn

The word “Telegraphic” was dropped in April, 1856, and the name became

the Daily Evening Bulletin to distinguish it from the weekly edition, which was

discontinued at the start of the Civil War. The “Daily” then was dropped from

This partnership continued until February 8, 1860, when Cummings went to

New York and became publisher of a new daily, The World. Cummings and

some wealthy religious New Yorkers planned a paper for evangelical readers that would not accept theatrical or liquor advertisements and not cover sordid or scandalous news. They lost $200,000, and offered the World for sale in 1862.

Cummings had urged Peacock and others to buy out as much of his interest in the Bulletin as they could afford. The proprietorship of the Bulletin was made into a joint stock association of 50 shares. The ownership was divided among Peacock, Cummings, James S. Chambers, Ferdinand L. Fetherston, Thomas J. Williamson, Casper Souder, Jr., and Ernest C. Wallace. The firm name became Peacock, Chambers & Company. Peacock was named editor and Chambers was elected publisher. Fetherston had entered the business department of The Bulletin in 1847, while still in his teens, and rose to management.

Under the association, the editor was to be employed “for a term of not more than five years at any one engagement,” at not more than $2,000 per annum. The publisher also had the five year limit and $1,200 in salary. The association was to continue five years, then the stock and property sold, divided or otherwise disposed of by vote of the proprietors.

Sen. Cameron had been appointed Secretary of War by President Lincoln, presumably a reward  for getting the Pennsylvania vote for the Republicans. Cameron had become an abolitionist Republican, although he had once been a Jackson Democrat.

In March, 1861, Chambers told Peacock he was going to be appointed Navy Agent in Philadelphia. He said that Secretary Cameron wanted to provide for Theodore T. Deringer, but could not give him the office because he was a Democrat. He would appoint Chambers to the post with the understanding that Deringer would “have a good situation” in the Bulletin office. (Deringer was brother of Henry Deringer, inventor of the well-known pistol.) Peacock was not comfortable with the arrangement.

In April, 1861, Chambers was appointed Navy Agent at Philadelphia. Other Bulletin share owners felt that he neglected his duties as publisher. Fetherston apparently performed the publisher’s duties. At a meeting on August 16, 1862, Peacock nominated Fetherston to replace Chambers, at the same salary as Chambers, $1,200. It was approved by 27 shares.

Fetherston reported to the office on September 3, and was rebuffed by Chambers. Fetherston and Peacock brought suit against Cummings and Chambers. When depositions were taken before the Supreme Court of Pennsylvania, Eastern District, January term of 1863, Peacock owned 20 shares, Fetherston four, Souder two, Wallace one, equaling 27 shares. Cummings owned 11 shares, Chambers10, and Williamson two, equaling 23.

Fetherston, in his court deposition, related that Cummings said he “never would have made this organization, or consented to leave his property in such a situation, subject to the mere whim of a majority.” Deringer, said Fetherston, asked him for his proxy to vote his shares, and if he did, Deringer would see that he got a salary increase — the balance to be given to Deringer.

Cummings told the court that he had “introduced” Peacock into the Bulletin office and "trained and taught him his duties.” Peacock said this was not true; his father had hired him in 1848. He said that contrary to Cummings’s statements, Cummings “never wrote any articles for the paper except on a very few occasions when he had personal quarrels on hand which others would not undertake.” On rare occasions he suggested articles, Peacock said.

According to Peacock, Cummings used the old company names of Cummings & Peacock and Chambers, Peacock & Co. to secure borrowing for personal use. He once asked Peacock if he could use the company name for borrowing a few hundred dollars for a few days, and Peacock later was sued and had his property levied for the debt. Peacock testified that in the spring of 1862, Cummings, “through” Chambers and Fetherston, urged Peacock to publish articles in editorial columns of the paper “defending him from charges of malpractice as an agent or officer of the U. S. government.”

The Bulletin had run in news columns an article in reference to Cummings’s earlier difficulties, in 1862. The war had begun, and his old political acquaintance, Secretary of War Cameron, appointed Cummings as a purchasing agent for the army. Cummings was suspected of misappropriating substantial funds ,possibly as much as $2,000,000, and of buying from favored suppliers great quantities of items the army did not need, such as straw hats and pickles. Congress investigated and censured Cummings, and President Lincoln apologized for the matter in an address to Congress.

Despite the scandal, the Cummings political connections remained solid. In June, 1863, he was appointed a colonel to command a new Philadelphia regiment, the 118th Pennsylvania Volunteers, soon to be redesignated the 19th Cavalry. The regiment trained in Philadelphia and then went to Washington. When it was ordered South, Col. Cummings suddenly was detached for recruiting duty. In February, 1864, he was appointed Superintendent of Troops of African Descent of Arkansas, but he was back in town exactly a year later, when the Bulletin was sold at public auction.

In May, 1864, a decision by the Supreme Court en banc in the law suit had left Peacock in charge of the editorial department and Fetherston in charge of the publishing department. The partnership of Peacock, Chambers& Company expired by legal limitation on February 1, 1865, and The Bulletin was put up for sale. The auction was held at the Bulletin offices at 112 S. Third St., with representatives from most other Philadelphia newspapers in attendance.

Alexander Cummings and James Chambers then commenced bidding, and the amount ran up to $88,000. Money then bid $89,000. There were no further bids. Mr. Freeman, the auctioneer, knocked down the price and asked, “Who’s the purchaser?” “Gibson Peacock, sir,” answered Money. Everyone was surprised, since Money and Peacock had started out bidding against each other.

Frederick Hudson, in his book “Journalism in the United States,” published in 1873, wrote: “If the material of The Bulletin alone were sold, it would not have brought over $20,000. But the character of the paper, the circulation, its advertising patronage, its reputation, sometimes dependent upon the life and health of one man, were what ran the price up to the point indicated and it is fair to suppose that the price paid was not too high.”

In April of 1865, five days after Lincoln was killed, Alexander Cummings had been brevetted a brigadier general by President Johnson, who was promoting just about every wartime colonel in long daily lists. In October, 1865, General Cummings was appointed governor of Colorado Territory. He lasted until April of 1867, and left Colorado with an indictment for malfeasance following him.

He returned to Philadelphia and founded a one cent morning newspaper, The Day, in November, 1869. In January, 1872, The Day was purchased by Lewis C. Cassidy, a prominent Philadelphia Democrat, and was converted to an afternoon paper. Cummings became Collector of Internal Revenue for the Fourth District of Pennsylvania, based in Philadelphia. He served for two years, during which complaints about his past record were made which led to his departure.

Cummings tried practicing law in Washington for a while, then was taken into the U. S. consular service. He was U. S. consul in Hawaii, and later in Ottawa, Canada, where he died in 1879. He is buried in Laurel Hill Cemetery, with a U. S. Army headstone.

After the 1865 auction, the Bulletin had a new plant and a new start, with Gibson Peacock in charge. A new “Bulletin Association” was formed, divided into one hundred shares, distributed among Peacock, Fetherston, Souder, Wallace and Williamson. The association bought the 10 year old five story building at 607 Chestnut St., on the site of the old Chestnut Street Theatre, which had been demolished in 1855. It was occupied by tenants whose leases had not expired, so the paper was published from 329 Chestnut temporarily. Early on the morning of January second, 1866, the new building was almost entirely destroyed by fire. It was rebuilt, and the 607 Chestnut offices were occupied May 5, 1866. The stereotyping process had been invented. Curved plates could be made to fit on press cylinders, and rolls of paper fed into the press, replacing hand feeding and speeding up the production to 12,000 papers an hour.