King Charles II was six-foot-three, a near giant by 17th century standards. He was a high-living spendthrift who loved tennis and women. He had 13 mistresses at one time or another, and 12 illegitimate children by seven different women. He was probably pleased when William Penn requested land for a Quaker colony. Maybe those nuisance Quakers would all move out and leave the Church of England in peace

Also, he owed Penn money. Penn’s father, an admiral, once paid for rations for the Royal Navy out of his own pocket, when the crown was short on cash. The debt came to about 16,000 pounds. King Charles was surely happy that Penn would take land instead of cash. Penn didn’t know it, but the king had offered to sell someone else the land west of the Delaware River for only1,200 pounds, and was turned down.

The king couldn’t just give away land. There were legal procedures to follow. Penn spent nearly a year meeting with bureaucrats and doing paperwork. He also spent about a year’s income, most of it in “gratuities” to helpful public officials. His early papers named the new colony Sylvania, meaning “forest.” King Charles stuck the name Penn on the front. Penn considered that immodest, but couldn’t get anyone to overrule the king, even when he offered the secretary of state a 20 guinea bribe.

On March 4, 1681, Charles II signed documents giving William Penn 45,000 square miles, their boundaries ill-defined. It was the largest tract of land ever owned by a private citizen. Penn set up a real estate sales operation immediately. His lawyer’s clerks began drawing up batches of deeds with blanks left for name, price and number of acres. He had agents peddling Pennsylvania land in Scotland, Wales, Holland and Germany.

He offered a variety of lot sizes and payment plans. Buyers of large acreage in the country were offered bonuses of city lot on which to build a town house. City purchasers could get a bonus of liberty land (we would probably call it free land) in areas just outside the city; the Northern Liberties ultimately became the most built-up, and the name survives as a neighborhood just north of the original city limits. A group of “adventurers” (we would say investors) could buy 50,000 acres and operate it under the feudal concept of “manor of frank.” The group could charter towns, levy its own taxes, resell land and use natural resources.

It was this type of deal that brought in a London investment group called the Free Society of Traders. Among its holding was all the land between Spruce and Pine Streets from river to river. The hill at the east end of the Society’s tract became known as Society Hill. There were 34 sales the first week, 471 by the end of the year. Penn found that about 80 different occupations were represented among the purchasers, and all useful ones such as carpenters, shoemakers and brewers; he expressed pleasure that there were no priests, no artists, no writers and no lawyers. Also among the first purchasers were seven single women. It wasn’t unusual in that era for women to own property or go into business, even in partnerships with men; but if they married, everything became the husband’s.

Although Penn assumed the title of True and Absolute Proprietor of Pennsylvania, he set about writing the charter for a form of government that would make him far from absolute. He devised an elected legislature with most power in a 72-person Council (he gave himself three votes) and a 500-member Assembly that would be expected to approve the Council’s decisions. Penn’s charter was radical by English standards. Courts were open to the public, and juries had the final say. Persons arrested could go free on bail. Prisoners didn’t have to pay for food and lodging. Only Christians could hold office, but everyone was entitled to his own religious opinion, and could not be persecuted for it.

However, Penn recommended that laws be passed against “all such offenses against God as swearing, cursing, lying, profane talking, drunkenness, whoredoms, fornications, uncleanness . . . stage plays, cards, dice, may-games, masques, revels, bull-baitings, cock-fightings, bear-baitings and the like. . .” Penn wrote to prospective land buyers that Pennsylvania was “600 miles nearer the sun than England,” and that in the fertile and less competitive New World, ordinary men who could scarcely afford to live, much less raise a family, “do marry there and bestow thrice more in all necessaries and conveniences (and not a little in ornamental things, too) for themselves, their wives, and children, both as to apparel and household stuff.” It sounded good to many. In October of 1681, a ship called “Bristol Factor” sailed with the first load of Penn’s purchasers, on a six-week trip to the promised land of Pennsylvania. By the end of 1682, there would be 23 shiploads of settlers. “Blessed be the Lord that of 23 ships, none miscarried,” Penn wrote. “Only two or three had smallpox.”

[Adapted from Historic Philadelphia, an Illustrated History, by James Smart] 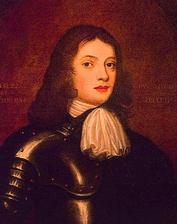 The City of Brotherly

"I doe Call the Citty to be layd out

by the Name of Philadelphia

and soe I will have it Called."

William Penn wrote that instruction on October 28, 1681, in a memo from London to his cousin, William Markham, his deputy governor in his new province of Pennsylvania. Philadelphia was the name of an ancient city that Christians since New Testament times had admired for its faithfulness.

The Greek word is usually defined by modern Philadelphians as “City of Brotherly Love.” Penn didn’t say what he thought it meant, but Thomas Blount’s “Glossographia,” a dictionary published in 1656, when Penn was a 12-year-old schoolboy, said it “signifies brotherly or sisterly love."